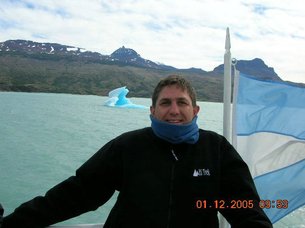 This is me, travelling in Patagonia, South Argentina, sailing to the Upsala Iceberg.
This was done after 30 years waiting for the right chance.
Argentina, where I was born and lived for 14 years until I made Aliah, (immigration) to Israel, under Alliath hanoars branch - (youth, without parents, immigration program).
My immigration was done alone, without my parents or sister.
This was due to the facts that my family was forced to sell and eliminate all their properties, belongings and businesses prior of coming to Israel.
My sister, Deby had to pass some extra exams at the end of her scholar year and I was free of that because I passed without any problem so, after some arrangements in the Iraeli Embassy in Buenos Aires, I came to Israel.
The flight and the arrival were both very traumatic and full of erratic encounters and bad impression.
My only 2 suitcases were banned and cut with a knife, in Amsterdam and with some masking tape I managed to make use of them until the arrival in Tel Aviv.
From the group of youngsters, I was the last one in cue, due to some investigations I must had in the airport.
In those days, people from Argentina used to fled all over due to military persecutions, specially if one belonged to Jewish community or to leftist.
I was only a Jew but never knew, at the age of 14 what is a leftist or anti-government activist, or anything similar to that.
The same day I arrived (2 AM), I was taken to Aloney Itzhak, an internate school,  near  givat ada and binyamina. after travelling 2 hours in the dark side roads of the north.
The day after, the place seamed very beautiful and well maintained, but observing under the hood, bad things happened to me.
Those days were hard to manage, new customs, new language and strange behaviour and friendships and above all, criminal behavior.
After less than a week, all my money was stolen and youth prostitution and maltreat of young woman became part of  my neighbor next door.
At the beginning, In my room, we were 3 young and lost 14 year old frighten kids
Two of them left back to Argentina after more or less 1 month.
I was very alone and not satisfied.
To communicate with anyone I had to wait for the right time, specially after school time.
My general academic knowledge was high so I was able to be fit with the rest of the class, but, friends or connections or even sharing was something non reachable for me.
I always had trouble with my parents and communication normally with them was not obvious or regular.
If truly speaking, I preferred to fled from them as far as possible
Israel was the only choice open and at the beginning it looked awful.
4 months after then my parents made Alliah (immigration) to Nazareth Elite, quite far from my site.